In solid state physics, a band gap, also called an energy gap or bandgap, is an energy range in a solid where no electron states can exist. In graphs of the electronic band structure of solids, the band gap generally refers to the energy difference (in electron volts) between the top of the valence band and the bottom of the conduction band in insulators and semiconductors shown as figure below. This is equivalent to the energy required to free an outer shell electron from its orbit about the nucleus to become a mobile charge carrier, able to move freely within the solid material. So the band gap is a major factor determining the electrical conductivity of a solid. Substances with large band gaps are generally insulators, those with smaller band gaps are semiconductors, while conductors either have very small band gaps or none, because the valence and conduction bands overlap. PAM-XIAMEN can supply single crystal wafers with direct or indirect band gap.

There are two types of band gaps, direct and indirect due to the different transition methods: 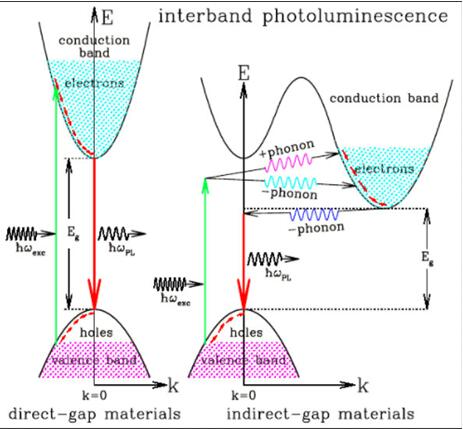 Conversely, if the conduction band electrons fall to the valence band (that is, electrons recombine with holes), they can also keep their momentum unchanged—direct recombination, that is, recombination occurs as soon as electrons and holes meet (no phonons are required to accept or provide momentum). Therefore, the lifetime of carriers in direct bandgap semiconductors will be very short; at the same time, this direct recombination can release almost all energy in the form of light, so luminous efficiency is very high. That’s why most light-emitting devices are made of direct bandgap semiconductors.

It can be seen from the energy band map that the K value of the electrons in the indirect band gap semiconductor will change during the transition. This means that the positions of the electrons in the K space before and after the transition are different, so there is a great probability of releasing energy to the lattice, converting it into phonons, and releasing it as heat energy. However, the electrons in the direct band gap only have energy changes before and after the transition, but no position changes, so there is a greater probability of releasing energy in the form of photons. On the other hand, for the indirect transition type, electrons in the conduction band need momentum to recombine with holes in the valence band. Therefore, it is difficult to generate luminescence based on recombination. If you want the indirect bandgap material to emit light, doping can be introduced into the light-emitting body to improve the luminous efficiency.

5-6-2 SiC RF Devices The main use of SiC RF devices appears to lie in high-frequency solid-state high-power amplification at frequencies from around 600 MHz (UHF-band) to perhaps as high as a few gigahertz (X-band). As discussed in far greater detail in References 5, 6, [...]

3-2. Scratches Grooves or cuts below the surface plane of the wafer having a length-to-width ratio of greater than 5 to 1. Scratches are speci ed by the number of discrete scratches times the total length in fractional diameter.

5-5-4 Patterned Etching of SiC for Device Fabrication At room temperature, there are no known conventional wet chemicals that etch single-crystal SiC. Most patterned etching of SiC for electronic devices and circuits is accomplished using dry etching techniques. The reader should consult References 122–124 which contain summaries [...]

5-4-1 Historical Lack of SiC Wafers Reproducible wafers of reasonable consistency, size, quality, and availability are a prerequisite for commercial mass production of semiconductor electronics. Many semiconductor materials can be melted and reproducibly recrystallized into large single crystals with the aid of a seed crystal, such as [...]