Lithium niobate (LiNbO3) wafer has excellent electro-optic, nonlinear and piezoelectric properties. With the advanced micro- and nanofabrication techniques, integrated photonics devices based on lithium niobate on insulator (LNOI) thin films have been extensively studied. In the future, high-performance LiNbO3 thin film prepared will support the further development of LNOI-based micro-nano optics, integrated photonics, and microwave photonics. The production of high-performance LNOI wafer will be an important part of the industrial application of lithium niobate optoelectronic devices. 4″ LiNbO3 thin film on Silicon Wafer (LNOI) with Y-cut and Z-cut can be provided by PAM-XIAMEN as follows: 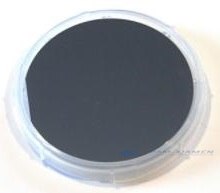 2. Property Comparison between LN and Si

A: The backside of Silicon substrate is ground, and the purpose of grinding is to adjust the TTV of the finished product. The attached picture shows the status of grinding Si substrate on b)side which is not polished, and there is no SiO2 layer.

We bonded the lithium niobate thin film directly to Si substrate, both sides of Si substrate don’t contain silicon dioxide SiO2. The mirror like specular reflection you mentioned should be generated after grinding, it is not the mirror after polishing.

Q2：Is there any optical quality test of the your company LN wafers like refractive index or propagation loss versus wavelength?

The FZ (float zone) gas-phase doped silicon single crystal with high purity, few defects, low compensation, and low oxygen and carbon content can be supplied by PAM-XIAMEN. It is widely used in various high-sensitivity detectors and low-loss microwave devices. To get more specifications of [...]

AlxIn1-xP is a ternary semiconductor material grown with X composition in the range of 0.5~0.52, which is lattice matched to GaAs. AlxIn1-xP is commonly used as a window layer in high-bandgap III-V solar cells, where it is responsible for reducing surface recombination by reflecting [...]