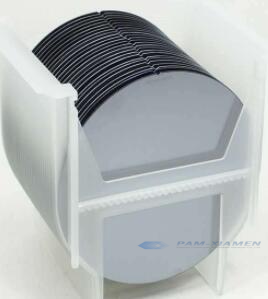 The <100> dark line defect has a high growth rate in GaAs quantum well lasers, but is suppressed in InGaAs quantum well lasers. The reason for this is that since In atoms are larger than Ga, Al and As atoms, the propagation of defects is hindered and acts as a dislocation blocker. In addition, compared with AlGaAs / GaAs laser, InGaAs laser diode has better performances:

(3) GaAs substrates are transparent to wavelengths above 900 nm, thus reducing the rate of defect reactions such as diffusion, dissociation, and annihilation due to recombination enhancement.

In addition, it can widen the wavelength (λ) of the laser to the range of 880nm≤λ≤1100nm by adjusting the In composition and well width. So InGaAs laser diode pumping is widely used in new laser devices. By frequency doubling, InGaAs-AlGaAs single-mode laser structure can be used as a blue-green laser. Due to the increased discontinuity of the conduction band caused by the strain of the epitaxial layer, the Auger recombination is reduced, so that the operating temperature of the diode laser can be as high as 180 °C.

When InGaAs is grown on GaAs, the maximum lattice mismatch can reach 7% to form a strained quantum well. In the strained layer quantum well structure, the difference between the two highest heavy hole energy levels can be controlled by changing the well width, and the difference between the highest heavy holes and the highest light holes can be controlled by controlling the axial strain. The thickness of the GaAs / InGaAs quantum well can affect the crystal structure, that is, the energy band changes through the action of stress, which makes the device design more flexible, which is beneficial to improve the device performance and design functional devices. The GaAs / InGaAs strained layer structure has been widely used in high-frequency high-speed devices and strained layer quantum well lasers.

Photolithography chrome masks are for sale. According to the different substrate materials, it can be divided into quartz mask, soda mask and others (including relief plate, film), etc. Among them, the photomask on quartz substrate and soda lime are commonly used lithography masks in [...]

Unusual defects, generated by wafer sawing: Diagnosis, mechanisms and how to distinguish from related failures

Unusual defects, generated by wafer sawing: Diagnosis, mechanisms and how to distinguish from related failures   In the wafer sawing process, unusual failures were observed and their root causes have been investigated. Besides classical and well-known failures, the following failure mechanisms were found. Surface-ESD (ESDFOS), caused [...]