AlxIn1-xP is a ternary semiconductor material grown with X composition in the range of 0.5~0.52, which is lattice matched to GaAs. AlxIn1-xP is commonly used as a window layer in high-bandgap III-V solar cells, where it is responsible for reducing surface recombination by reflecting minority carriers. We can offer 2″ GaAs epi wafer with AlInP layer as follows:

No.1 AlInP Thin Film on GaAs Substrate for Laser Application

We have studied the GaAs / InAlP and GaAs / GaInP Interfaces by photoelectron spectroscopy. Reliable information on the chemical evolution of the interface is obtained through the combination of depth profiles by Ar+ sputtering and angle-resolved X-ray photoelectron spectroscopy. The GaAs / AlInP interface has a longer extension length than the GaAs / GaInP interface. We found traces of P atoms in a chemical environment different from the usual InAlP coordination on the top of GaAs / InAlP interface, and the mixed phases at the interface, such as InAlP, GaInAsP and AlGaInAsP. 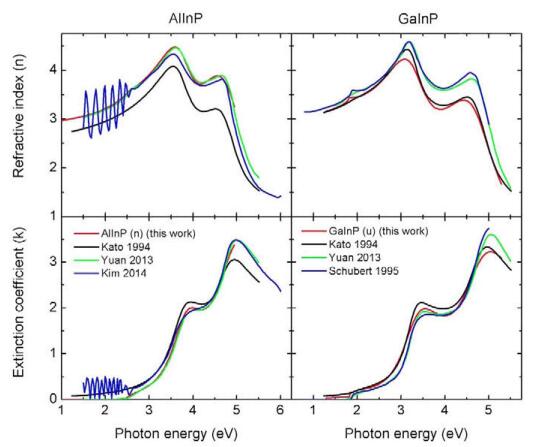 The ternary semiconductor InAlP is widely used in various optoelectronic applications. AlInP band gap is the widest bandgap III-V material that matches with GaAs. Therefore, InAlP is used for fabricating multi-junction solar cells, visible AlInP lasers, laser diode and multi-quantum barrier lasers. In addition, it can be for 480nm APD and photodiode with narrow band and high sensitivity.