GaAs based AlGaInP laser diode wafer can be supplied by PAM-XIAMEN with a band of 635nm. The III-V AlGaInP semiconductor material that can be lattice matched with the GaAs substrate has a wide direct band gap (1.9~2.3eV), a wide range of luminous wavelengths and high luminous efficiency. AlGaInP is the best material for preparing high-brightness red, orange, and yellow lasers and light-emitting diodes (LEDs). Following is a 635nm visible diode laser epi structure of GaInP / AlGaInP for reference: 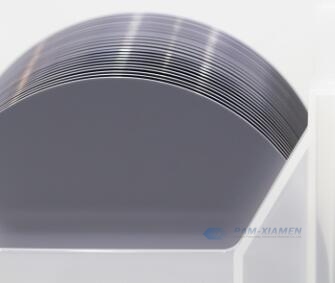 The materials of GaInP / AlGaInP compressive strain confinement quantum well lasers are obtained by MOCVD one-time-epitaxial growth. The use of compressive strain in the active region can reduce the threshold current and operating current while improving the efficiency. Since GaInP and AlGaInP materials can easily form metastable ordered structures during the MOCVD epitaxy process, which should be avoided as much as possible in lasers, and disordered structures have narrower gain spectral line widths. In order to avoid the formation of ordered structure in the MOCVD growth of GalnP / AlGaInP materials, AlGaInP quantum well lasers generally use off-angle GaAs substrates. Moreover, the off-angle substrate can increase the p-type doping concentration in the confinement layer, thereby increasing the effective barrier of electrons in the active region, reducing the leakage of carriers, and helping to improve the high temperature performance of the device.

4. About Dopant of AlInP Layer in AlGaInP LD Epitaxial Structure

To solve the problems of carrier leakage, the AlInP with largest band is used as cladding layers. Due to the low refractive index, it can strongly restrict light conduction waves. And the AlInP layers need to highly dope with p-type or n-type, obtaining the electrical conductivity as high as possible. It is proofed that because of the lower diffusivity and better controllability, Mg is more suitable to be used as p-type dopant for AlInP than Zn. Meanwhile, it is found that adding undoped Mg barrier in Al(Ga) InP cladding layers can improve the emission efficiency of AlGaInP laser diode.