Things You Should Know about Atomic Layer Deposition (ALD)

Things You Should Know about Atomic Layer Deposition (ALD)

Atomic Layer Deposition (ALD), also known as atomic layer epitaxy (ALE), is an atomic-scale thin film preparation technology. It can deposit ultra-thin films with uniform thickness, controllable thickness and adjustable composition. With the development of nanotechnology and semiconductor microelectronics, the size requirements of devices and materials are continuously reduced, and the aspect ratio in the device structure is continuously increased, requiring the thickness of the materials used to be reduced to the order of ten nanometers to several nanometers. Atomic layer deposition technology has gradually become an irreplaceable technology in related manufacturing fields. Its advantages determine that it has huge development potential and broader application space. Metallic silicon wafers by ALD can be provided by PAM-XIAMEN.

4) The excess reactants and by-products are purged by the inert gas, and then circulated in sequence to realize the layer-by-layer growth of the thin film on the surface of the substrate. 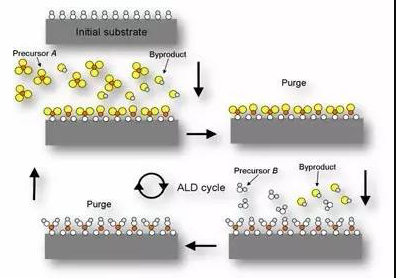 A wide variety of materials can be deposited by atomic layer deposition, such as:

2. Comparison of ALD, PVD and CVD

Compared with traditional thin film preparation technology, atomic layer deposition technology has obvious advantages. Traditional solution chemical methods and physical methods such as sputtering or evaporation (PVD) are not suitable for deposition and film formation on the surface of three-dimensional complex substrates due to lack of surface control or the existence of sputtered shadow areas. The chemical vapor deposition (CVD) method requires strict control of the precursor diffusion and the temperature uniformity of the reaction chamber, and it is difficult to meet the requirements of thin film uniformity and precise control of thickness. In contrast, ALD technology is based on surface self-limiting and self-saturating adsorption reactions, and has surface control. The bottom surface is deposited to form films, while still ensuring precise sub-monolayer film thickness control. Therefore, ALD technology is widely used in microelectronics, energy, information and other fields.

Figure 2. Comparison of ALD, PVD, CVD and so on

Photomask blank with antireflective chromium is available. Photomasks are mainly used in integrated circuits, flat panel displays (including LCD, LED, OLED), printed circuit boards and other fields. The photomask is a pattern master used in the photolithography process in microelectronics manufacturing. Here are specifications [...]