To ensure the performance of the LED wafers offered by us (more wafer specifications please view: https://www.powerwaywafer.com/gan-wafer/epitaxial-wafer.html), we will test the wafer performance after it made. Below we describe the electroluminescence testing techniques performed on our GaAs LED wafers:

3.How to Do the Electroluminescence Testing?

EL measurements are usually performed on finished devices (such as LEDs) because it requires a device structure to inject current. The electroluminescence testing tool applies a forward current of 1-40mA to the cell, acting on both sides of the diffusion junction, and the electric energy excites the atoms in the ground state, making them in the excited state, and the atoms in the excited state are unstable and carry out spontaneous radiation. Through the function of the filter and the exposure degree of the film to understand the intrinsic transition in the spontaneous emission; through the relationship between minority carrier lifetime, density and light intensity, from the exposure degree of the film, to judge whether there is a defect on GaAs LED epi wafer.

When do the El test for the above LED wafer, we test in the middle of the wafer, select several points, and then test at 20mA current. The electroluminescence data we tested are shown as figure below: 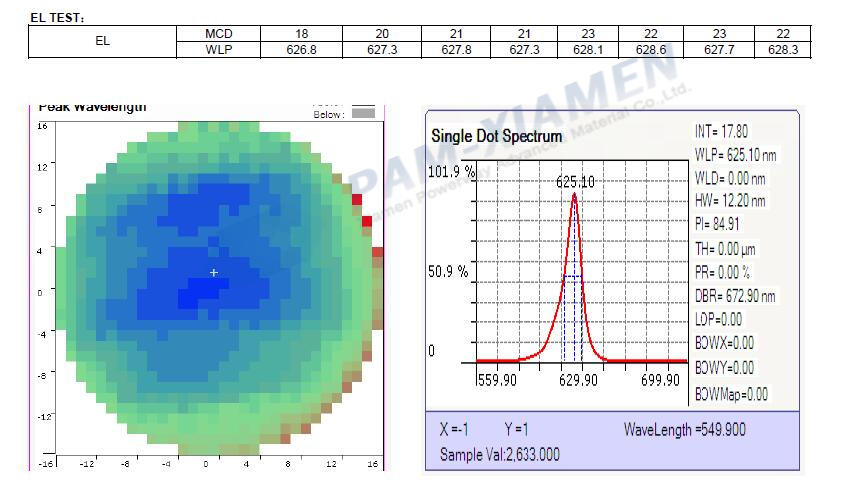 Why Do You Need Gallium Nitride (GaN) Semiconductor Wafers?

PAM-XIAMEN, a wafer substrate supplier, offers epi ready substrate wafer as follows:  Wikipedia: Substrate is a solid (usually planar) substance onto which a layer of another substance is applied, and to which that second substance adheres. In solid-state electronics, this term refers to a thin slice [...]