The global demand for ultra-bright blue and green LEDs has driven the development of LED nitride wafer technologies. Among them, sapphire substrate is currently the most common substrate material in GaN epitaxial growth, and it is also the substrate of epitaxial GaN material with the best comprehensive performance so far. PAM-XIAMEN can grow GaN LED epitaxial wafer on sapphire with blue emission, specs listed for reference: 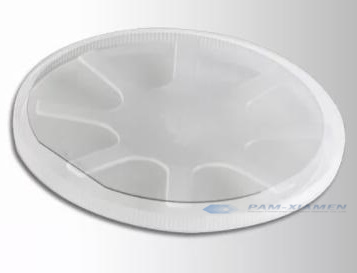 The quantum efficiency of the LED wafer is ~50;

If you want to LLO, we should polish backside for you specially;

InGaN/GaN active layer has greatest impact on the luminous efficiency. In order to obtain high-performance devices, the layer thickness of blue LED wafers will be optimized and precisely controlled during the entire epitaxial growth process each year or each two year. Compared with the former LED GaN epitaxy structure (PAMP17210-LED) below produced by PAM-XIAMEN, the current thickness of GaN epitaxial growth layers is thicker, which is suitable for laser lift-off: 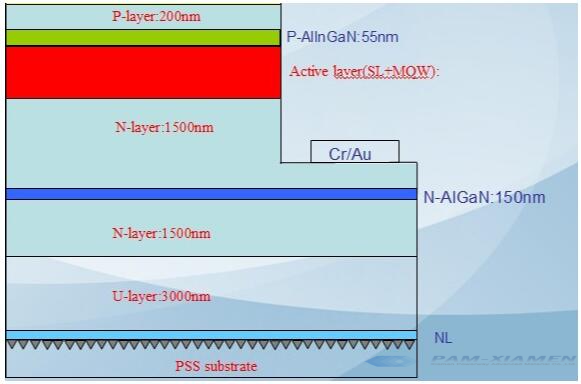 Some customers came into a question that when they try to plasma etch for some areas of heteroepitaxial growth of GaN thin films (PAMP19085-LED) down to the sapphire substrate, it seems always some materials left on the substrate and this material is conductive. However, such a situation didn’t happen for the previous PAMP17210-LED “thinner” wafers.

For fabricating LED devices, some parts of the LED wafer down to the sapphire need to etch, making isolated small LEDs. If you etch to the sapphire, the sapphire must be non-conductive. It is recommended to increase the etching thickness. Before we make epi layers, sapphire will have an AlN coating (very thin, ~20-30nm), which should be etched. Otherwise we guess that the customer has leakage when making chip. PAM-XIAMEN’s technician suggests that the thickness of etched n-electrode is about 1.2 to 1.5um.

For 455 nm blue LED wafer of GaN thin layer on sapphire substrate, a paper reports that fabricating a flip chip LED on patterned sapphire substrate light-emitting diode (LED) epitaxial wafers will have a peak EQE and wall plug efficiency of 76% and 73%, respectively. This flip chip can increase light extraction over a traditional flip chip LED due to the increased reflectivity of the dielectric based.

There are many methods for improving the LED EQE. Growing GaN epitaxial films on patterned sapphire substrate could improve the EQE in LED, and for the flip chip LED, a thick sapphire substrate is more suitable for EQE than the thin one. Researchers have developed the roughness method of grinding process and pattern the wafer by dry etching to optimize the EQE. In addition side wall shaping and truncated inverted pyramid shaping technology is developed for improve the EQE of GaN LED.

The laser lift-off mechanism of LED GaN epitaxial structure on patterned sapphire was studied by researchers. They found that PSS-LED (LED on patterned sapphire) requires much higher energy density than FT-LED (LED on flat sapphire), and since the Concave pattern on PSS substrate will greatly increase the diffraction of photon, contact is found when using excimer to perform LLO on LED/PSS. The energy density of the surface cannot reach the threshold required for LLO, resulting in an inability to form an effective peel at the contact surface. The specific reasons are analyzed from a paper[1] as follows：
In patterned LED structure, transmission energy density of trapezoid zone sidewalls is much less than ET∗ (674 mJ/cm2). The adhesion is strong between GaN and sapphire on the sidewalls. So GaN epilayers can’t be lift off when the incident laser power is less than the critical energy density. Although the transmission energy is low on the sidewalls, GaN epi film can be peeled off with a incident laser power of 920mJ/cm2.
In addition, the energy density on the bottom and triangle regions is far high from ET*, which will introduce localized heating of layers above the critical sublimation temperature of Ga. And gases of Ga and N2 will be generated over these two areas. Then, the gases separate the interfaces of GaN and sapphire in trapezoid zones. So the sidewalls of trapezoid zone are separated by the penetration of gases rather than the laser lift-off. GaN residues are remained on the sidewall surface. This is a “mechanical stress” separation, which will cause the formation of dislocations and stacking defaults and leakage current increase.

A fracture criterion for gallium arsenide wafers The fracture of single crystal gallium arsenide (GaAs) semi-conducting wafers was studied. Prismatic beam specimens, cut at different crystallographic orientations from thin wafers, were loaded to failure in four-point bending. Fracture in these crystals occurred predominantly on the [...]

Characterization of 6.1 Å III–V materials grown on GaAs and Si: A comparison of GaSb/GaAs epitaxy and GaSb/AlSb/Si epitaxy