The growth modes are shown in figure below: 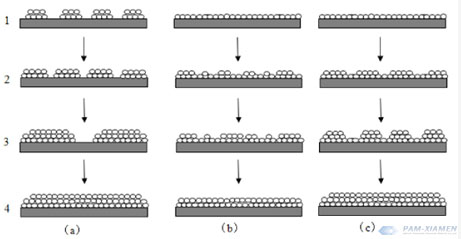 Island growth is easy to grow 3C-SiC on 4H-SiC. In order to prevent the formation of other crystal types, the growth needs to be controlled as layered growth. However, the pure carbon-silicon bilayer will undergo mixed growth-even if it is layered growth at the beginning, it will begin to grow silicon carbide single crystals in other types later.

The reason can be analyzed microscopically: if the deposited gas atoms are regarded as a hexahedron, the surface of a piece of substrate is divided into terrace, step, and kink, which is based on the number of contact surfaces. All the three are called TLK structure:

Step-controlled epitaxy growth of silicon carbide: Use a substrate with an off-angle to the (0001) plane to build more steps, reduce mesa, prevent spontaneous nucleation, and further prevent the formation of 3C-SiC.

3C-SiC nucleation will still occur on low-off-angle substrates with a deviation of 4° and below, resulting in triangular defects. Triangular defect = two basal plane dislocations + stacking faults, two basal plane dislocations extend into a hypotenuse, and the middle is a stacking fault, which is easy to directly collapse. To avoid this defect, it needs to control temperature, air flow and other conditions.

Growth Mechanism of GaAs Microdisk Structures by Area-Selective Epitaxy Using Migration-Enhanced Epitaxy We have carried out area-selective epitaxy of GaAs microdisk structures on a SiO2-masked GaAs substrate by migration-enhanced epitaxy. We have successfully grown “damage-free” disks at 590 °C. It is found that, for the [...]