How to Test the Distribution of Silicon Carbide Crystals by Raman Spectroscopy?

How to Test the Distribution of Silicon Carbide Crystals by Raman Spectroscopy?

1. What is Raman Spectroscopy?

In 1928, Indian scientist Raman discovered Raman scattering in the experiment of studying the scattering spectrum of liquid benzene. Raman scattering spectroscopy, in simple terms, is that use a beam of light incident on a substance, the frequency of the incident light is v, and the frequency of the resulting scattered light will be v, v+Δv1, v-Δv1, v+Δv2, v-Δv2, and so on. These Δv1, Δv2, etc. Δv are with characteristics. In other words, each substance has a certain difference (peak position, peak intensity), which is called Raman shift(the emitted light minus the incident light).

For example, the Raman spectrum of 4H-SiC is:

The table above shown here is the Raman shift. During the silicon carbide crystal distribution measurement, the computer will help to calculate it and process it as a Raman shift spectrum.

2. How to Test the Silicon Carbide Crystal Distrubution?

Typical test conditions are: using the 532nm laser of the Ar+ laser of the LabRAM HR Raman spectrometer, it is incident vertically, the excitation power is 200mW, and the mode of collecting scattered light is the backscatter mode. The incident light with different wavelengths has different penetration depths. Generally, the 266nm laser is 0.2um, the 325nm laser is 2um, and the 514nm laser is 30um, which means that ultraviolet light can only be used to measure thin samples. 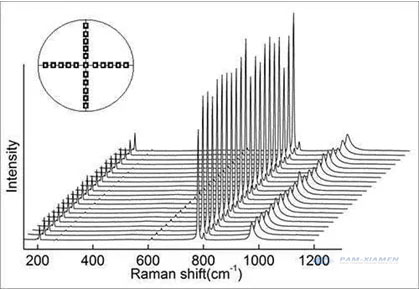 The data has three indicators: the position of the peak, the height of the peak (light intensity), and the width of the peak. Only when the peak position is completely matched, can it be the qualified 4H-SiC. As with XRD, whenever there are other peaks, they are substances of other phases, which is a defect.

It is worth noting that the LOPC mode (964.769 cm-1) can be used to analyze the carrier concentration:

As the carrier concentration increases, the interaction between atoms and the lattice increases, which makes the Raman peak blue shift (smaller), the intensity decreases, and the width increases. This method is not as accurate as other methods and can only be used as an aid to analyze the silicon carbide crystal distribution.

3. Why not Use XRD to Measure Silicon Carbide Crystal Distribution?

X-rays are optical radiation generated by the transition of electrons in the inner layer of atoms under the bombardment of high-speed moving electrons, including continuous X-rays and characteristic X-rays. Silicon carbide single crystal can be used as X-ray gratings, and the coherent scattering produced by these large numbers of particles (atoms, ions, or molecules) will cause light interference, increasing or decreasing the intensity of scattered X-rays. Due to the superposition of scattered waves from a large number of particles, the beams that interfere with each other to produce the highest intensity are called X-ray diffraction lines.

To meet the diffraction conditions, Bragg formula can be applied: 2dsinθ=nλ.

The incident beam causes each scatterer to re-radiate a small part of its intensity as a spherical wave. If the scatterers are arranged symmetrically with the interval d, these spherical waves will only be synchronized in the direction where their path length difference 2dsinθ is equal to an integer multiple of the wavelength λ. In this case, a part of the incident beam is deflected by an angle of 2θ, which will produce reflection points in the diffraction pattern.

In this work we execute computational calculations to investigate the structural, electronic and magnetic properties of the GaN/MnN/GaN and MnN/GaN/MnN interlayers. The calculations were carried out by a method based on pseudopotentials, as implemented in the Quantum ESPRESSO code. For the description of the [...]

This paper reports the mechanical and electrical characteristics of Ge/Ge interfaces prepared by room-temperature surface-activated bonding (SAB). Bonded Ge/Ge wafer pairs with high bonding strength equivalent to that of the bulk material were achieved without any heat treatment. It was found that the bonding [...]

High quality GaAs based epistructures from PAM-XIAMEN – one of leading epitaxial wafer manufacturers are provided for the research, development and (potentially) later commercialization of very high efficiency light emitters for thermophotonic applications. In particular, commercially available GaAs based epi structure materials are offered [...]