Phosphorus-containing III-V compounds are the preferred materials for millimeter-wave and submillimeter-wave devices and circuits, optoelectronic devices, and solar cells. InGaP lattice matched to GaAs has a direct band gap of 1.9eV at room temperature, which is a highly efficient light-emitting material. We are pleased to offer InGaP layer to our customers including many who are developing better and more reliable for HEMT and HBT structures, but also for the fabrication of high efficiency solar cells used for space applications. Some GaAs epiwafer with InGaP epilayer heterostructure from PAM-XIAMEN are listed for your reference. We will provide Photoluminescence (PL) and X-ray diffraction spectra test for you if necessary. 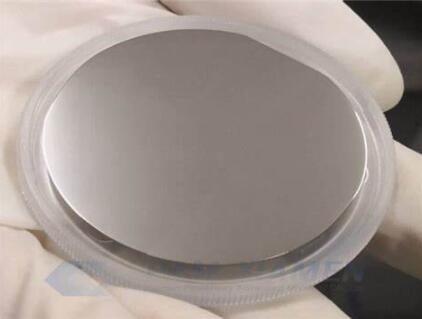 No.1 InGaP Quantum Dots Based on Gallium Arsenide by MOCVD PAMP20345-INGAP

The SEMI-EJ of InGaP epitaxial wafer is shown as figure below: 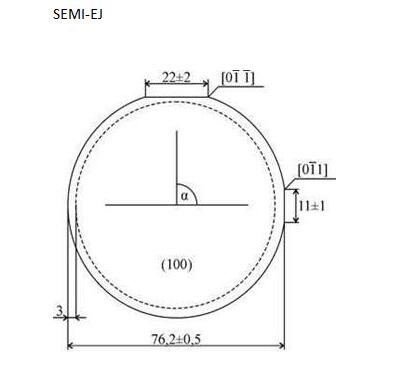 No. 4 InGaP Thin Film on GaAs

No. 5 InGaP layer Epi on GaAs

No. 6 InGaP on GaAs for pHEMT

We also can supply EPI structure on GaAs, type – pHEMT with stop-layer InGaP.

Please find below specification on this product: D – 76.2 mm

Structure should be made based on wafers from polarizing GaAs, EPI method.

Scratches or other defects: none

– total length of all scratches – no more than 2 dia.

Electro-physical parameters are controlled by temperature of liquid nitrogen and common room. All technical requirements should be controlled on distance ³2 mm from wafer’s edge. Deviation of controlled parameters from average data – no more than ±5%

It is used in high-power and high-frequency electronics because of its superior electron velocity with respect to the more common semiconductors silicon and gallium arsenide.

It is used mainly in HEMT and HBT structures, but also for the fabrication of high efficiency solar cells used for space applications and, in combination with aluminium (AlGaInP alloy) to make high brightness LEDs with orange-red, orange, yellow, and green colors. Some semiconductor devices such as EFluor Nanocrystal utilise InGaP as their core particle.

Ga0.5In0.5P is a solid solution of special importance, which is almost lattice matched to GaAs. This allows, in combination with (AlxGa1−x)0.5In0.5, the growth of lattice matched quantum wells for red emitting semiconductor lasers, e.g. red emitting(650nm) RCLEDs or VCSELs for PMMA plastic optical fibers.

Ga0.5In0.5P is used as the high energy junction on double and triple junction photovoltaic cells grown on GaAs. Recent years have shown GaInP/GaAs tandem solar cells with AM0 (sunlight incidence in space=1.35 kW/m2) efficiencies in excess of 25%.

A different composition of GaInP, lattice matched to the underlying GaInAs, is utilized as the high energy junction GaInP/GaInAs/Ge triple junction photovoltaic cells.

Growth of GaInP by epitaxy can be complicated by the tendency of GaInP to grow as an ordered material, rather than a truly random solid solution (i.e., a mixture). This changes the bandgap and the electronic and optical properties of the material.

GaInP is the material with the largest valence band discontinuity among the III/V compounds, and has many unique advantages, so it is highly valued:

(1) The △Ev of GaInP/GaAs is ~0.4eV, which is 286meV larger than that of AIGaAs/GaAs. The energy band discontinuity of AIGaAs/GaAs heterojunction is mainly the conduction band △Ev, while the energy band discontinuity of InGaP/GaAs heterojunction is mainly Valence band △Ev. A high ΔEv/ΔEc ratio helps improve electron injection efficiency in devices such as InGaP HBT, thereby increasing gain. When the △Ev is large, the device has excellent high temperature characteristics.

(3) It does not contain Al, and there is no DX center, thereby improving the reliability of the device. The InGaP / GaAs system combines the advantages of InP-based phosphide and GaAs-based compounds, and is an ideal material system for research and development of new materials and industrialization.

PAM XIAMEN offers Silicon wafers. We are often asked how many silicon wafers are produced annually. The answer depends on a more specific question including: What Diameter What Country or Entire World Semiconductor or Solar industries or both Monitor Grade, Test Grade, Prime Grade Above are just some terms that need [...]

Optical interference effect of a thick absorbing LT-GaAs layer on a Bragg reflector   Near-infrared reflectance spectra of 5 μm thick low-temperature (LT) GaAs films on GaAs/AlAs Bragg reflectors (BRs) have been studied by model calculations as a function of the linear absorption coefficient of the films αf. [...]