PAM XIAMEN offers GaN LED epiwafer, which is grown on a patterned sapphire substrate (Al2O3) heated to an appropriate temperature, the gaseous substance InGaAIP is transported to the surface of the substrate in a controlled manner, and a specific single crystal film is grown. At present, the LED epi wafer technology mainly adopts the MOCVD method. In addition, we can offer the gallium nitride LED wafer epi layer on silicon or silicon carbide substrate. 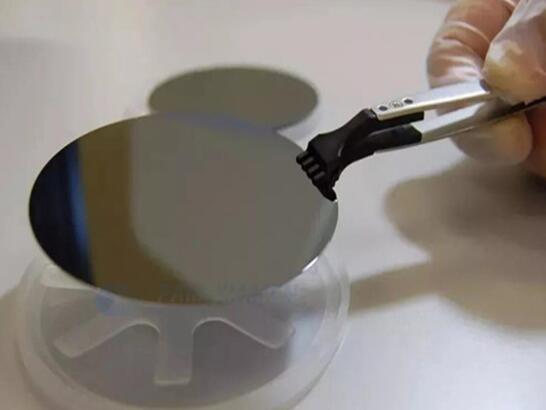 No.2 UV LED Wafer with a light emission wavelength of 275nm~405nm is used for forged document detection, UV curing, hotel room inspection, magnetic surface analysis and so on;

No.3 Blue / green GaN LED Epi on Sapphire is provided with the sizes of 50mm~200mm grown by MOCVD and has an excellent stability at high temperature.

In addition to growing on sapphire, silicon and SiC substrate, PAM-XIAMEN carries out researches of LED epiwafer grown on other substrate materials, like GaN and ZnO. However, the LED epi-layer grown on GaN and ZnO substrate is still in the research and development stage. It takes long time for industrialization. Following is the specific development status of Micro LED epi wafer process on different substrates:

At present, the most popular substrate for GaN epi structure growth is Al2O3, which has the advantages of good chemical stability, no visible light absorption, competitive price and relatively mature manufacturing technology. Although there are many shortcomings, the shortcomings are overcome. For example, large lattice mismatch is solved by the transition layer growth technology, and poor conductive performance is overcome by the same side P, N electrode. Due to the poor mechanical performance, it is not easy to cut. But it can be cut by laser scratches, large heat loss with the epitaxial layer to form compressive stress, so the blue epitaxy wafers grown on flat/patterned sapphire substrates will not crack. However, the poor thermal conductivity of the device is not exposed to obvious deficiencies in the low current operation, but the problem is very prominent in the power device under the high current operation.

In addition to Al2O3, SiC substrate is the second largest substrate for GaN growth. It has many outstanding advantages, such as good chemical stability, good electrical conductivity, good thermal conductivity, no visible light absorption, etc. However, the shortcomings are also very prominent, such as the expensive cost, poor crystal than Al2O3 and Si, and poor machining performance. Due to the excellent electrical and thermal conductivity of SiC substrate, most epi wafer manufacturers use upper and lower electrode structure to improve the heat dissipation of LED power devices fabricated on GaN LED epi in wafer.

Once the LED epi wafer manufacturing process on Si substrate achieves a breakthrough, the costs of epitaxial LED wafer growth and device processing will be greatly reduced. As the substrate of GaN material, Si sheet has many advantages, such as high crystal quality, large size, low cost, easy processing, good electrical conductivity, thermal conductivity and thermal stability. However, because of the large lattice mismatch and thermal mismatch between GaN epitaxial layer and Si substrate, and the easy formation of amorphous silicon nitride, it is difficult to obtain crackless and device-level quality epi wafer GaN on Si substrate. In addition, due to the heavy light absorption of silicon substrate, LED light emitting efficiency is low.

The most ideal substrate for the LED epitaxial growth is gallium nitride single crystal material, which can greatly improve the crystal quality of epitaxial film, reduce the dislocation density, prolong the device’s service life, improve the luminous efficiency and the device working current density. However, it is very difficult to prepare single crystal GaN material, and so far there is no effective method. Some researchers have grown GaN thick film on other substrates (such as Al2O3, SiC) by HVPE method, and then separated the substrate and gallium nitride thick film by stripping technology. The separated GaN thick film can be used as the substrate for epitaxial growth. The gallium nitride thick film has an obvious advantage that the dislocation density of GaN thin film with it as the epitaxial substrate is significantly lower than that of the epitaxial GaN thin film on Al2O3 and SiC. But it’s expensive. Therefore, the use of GaN-based LED wafer is limited.

The reason for choosing ZnO substrate for GaN epitaxial wafers is that ZnO and GaN have very striking similarities. They have the same crystal structure, very small lattice mismatch, close band gap (small band discontinuity value, small contact barrier). However, the fatal weakness of ZnO as GaN epitaxial substrate is that iT is easy to decompose and be corroded in the temperature and atmosphere of GaN epitaxial growth. At present, ZnO semiconductor materials can not be used to manufacture optoelectronic devices or high temperature electronic devices, mainly because the material quality can not reach the device level and p-type doping problem has not been really solved, the equipment suitable for the growth of ZnO-based semiconductor materials has not been developed successfully. Future research and development will focus on finding suitable growth methods. However, ZnO itself is a promising luminescent material. The band gap width of ZnO is 3.37 eV, which is a direct band gap. Compared with other semiconductor materials such as GaN, SiC and diamond, ZnO has the greatest development potential in the violet light band around 380 nm, and is an ideal material for high efficiency violet light emitting devices and low threshold violet light semiconductor lasers.

The substrate material determines the semiconductor lighting technology development. Therefore, it is very important for LED epi-wafer fabs to take the following factors into consideration when choosing the substrates:

PAM XIAMEN offers Single crystal GaTe Substrate. Gallium(II) telluride, GaTe, is a chemical compound of gallium and tellurium. There is research interest in the structure and electronic properties of GaTe because of the possibility that it, or related compounds, may have applications in the [...]

Unusual defects, generated by wafer sawing: Diagnosis, mechanisms and how to distinguish from related failures

Unusual defects, generated by wafer sawing: Diagnosis, mechanisms and how to distinguish from related failures   In the wafer sawing process, unusual failures were observed and their root causes have been investigated. Besides classical and well-known failures, the following failure mechanisms were found. Surface-ESD (ESDFOS), caused [...]