Low temperature grown (LTG) gallium arsenide (GaAs) thin-film on GaAs substrate is available for photodetctors and photomixers. In addition, we can supply gaas epi wafer, for more GaAs thin film wafer please view https://www.powerwaywafer.com/gaas-wafers/gaas-epiwafer.html. LTG-GaAs is GaAs grown at a low temperature of 250-300 degrees Celsius using MBE. LT-GaAs has a sub-picosecond carrier lifetime and high resistance after annealing, with a resistivity of 107Ω*cm, which can prevent the formation of oxides and prevent the pinning effect of the metal-semiconductor interface. Moreover, low temperature grown gallium arsenide thin film has high breakdown electric fields and relatively large mobility. These properties make LT-GaAs one of the preferred materials for fast and sensitive various optoelectronic devices, such as photodetectors and photoemixers. For more GaAs thin film data sheet, please refer to the table below: 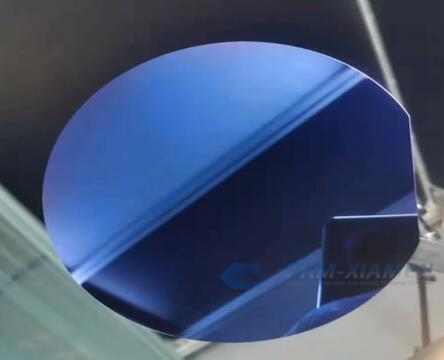 Compared with GaAs, AlAs layer has higher lattice constant, which enables the growth of LT-GaAs with larger lattice constant. The photocurrent generation in low-temperature grown GaAs can be significantly improved by inter-insertion growth of AlAs. The AlAs layer allows more arsenic to be incorporated into the LT GaAs layer, preventing current diffusion into the GaAs substrate.

Marsch reported the fabrication and high-frequency performance of free-standing LT GaAs-based photoconductors and photomixers. The photoresponse of the devices showed transient electrical effects with a width of 0ps~55ps and an amplification voltage of 1.3V.

Han Qin et al. fabricated a GaAs-based 1. 55um resonator-enhanced (RCE) photodetector by using LTG GaAs material as a light absorption layer, and analyzed and studied its photoelectric properties. The dark current of the device is 8.0x 10-12A; the peak wavelength of the photocurrent spectrum is 1563nm; the half-width of the response spectrum is 4nm, with good wavelength selectivity.

The main applications and research progress of LT GaAs epilayer in optoelectronic devices are briefly introduced, which are very meaningful for improving the performance of LT GaAs thin film devices. When the device enters the sub-micron level, unalloyed ohmic contact can be formed, avoiding the heat treatment process of ohmic contact for the device, and the efficiency and performance of the device will also be greatly improved. It’s believed that LT-GaAs will become an indispensable information functional material in GaAs-based devices in the near future.

Characterization of LT GaAs carrier lifetime in multilayer GaAs epitaxial wafers by the transient reflectivity technique A methodology for determining the carrier lifetime of LT GaAs buffer layers in GaAs multilayer wafers utilizing the femtosecond transient reflectivity technique is introduced. Experimental results and computer simulations performed as a function of [...]

PAM XIAMEN offers SiO2 (single crystal quartz). Single crystal quartz wafer is an excellent substrate for microwave filters for wireless communication industries. Conversion from the three-index system to the four as [u ‘ v ‘ w ‘ ] —> [u v t w] is [...]

GaN LED structure grown on nano-scale patterned sapphire (Al2O3) substrate can be provided with high efficiency of photoluminescence and electroluminescence. However, because of the high customization of the epitaxial process in the InGaN/GaN-quantum wells based LED heterostructure, we cannot get the optimal solution for [...]