A simple example is given: look at the upper part, the gate+emitter+N is completely a vertical MOSFET structure, but a P-type semiconductor is added at the bottom to form a PNP-type BJT. 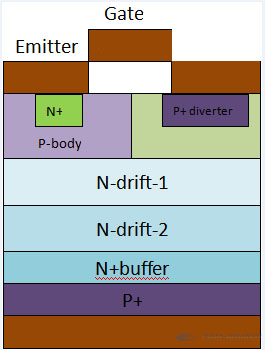 The principle of energization is divided into two parts:

Finally, the current flows from the collector to the emitter. Because of the existence of the PN junction, there are electrons and holes that conduct electricity.

Give a few examples.

Connecting wires to the above structure, it can be used as an IGBT single tube. The appearance is similar to the MSOFET; after all, it is also used as a switch.

If several IGBTs are put together, or put together with other devices, they can be used as IGBT modules.

IGBT merges the advantages of BJT and MOSFET, such as low driving power and reduced saturation voltage.

The development of silicon carbide IGBT is shown below:

However, the P-type silicon carbide substrate is not practical at this stage because the resistivity is very large, at 100mΩ•cm. The common resistivity of N-type SiC substrate is 15-30mΩ•cm, or less than 10mΩ•cm.

The high resistivity is caused by the difficulty of Al doping.

Al is directly mixed in silicon carbide, and it will be depleted in the early growth stage, forming defects. However, if Al3C4 is heated by an external heating system, and then transported by He gas, the Al doping concentration is difficult to control. By this method, a 100mΩ•cm P-type silicon carbide substrate with a concentration of 10^20cm-3 can be obtained. Al (CH3)3(trimethylaluminum, TMA for short) will react with graphite, and then forming aggregates to block the pipeline. However, the epitaxial growth of P-type silicon carbide layer will still be prepared with H2 as a carrier gas.

Measurements on the spectroscopic performance of CdZnTe coplanar grid detectors

The growth of cubic silicon carbide on silicon, namely 3C-SiC/Si, has been extensively studied at the University of South Florida over the past decade and numerous electronic and biomedical applications explored using this material system. The key step to 3C-SiC devices is the growth [...]