GaAs-based AlGaInP red LED epi-wafer is a common visible light LED material that has been widely developed in recent years. AlGaInP quaternary red LED has many advantages such as strong current bearing capacity, high luminous efficiency and high temperature resistance. It has an irreplaceable position in the application of lighting, display and indicator lights, and is widely used in various fields of lighting. PAM-XIAMEN supplies positive polarity AlGaInP / GaInP LED wafer at 620nm wavelength. The specific parameters of positive LED wafer for sale are listed in the table as follows: 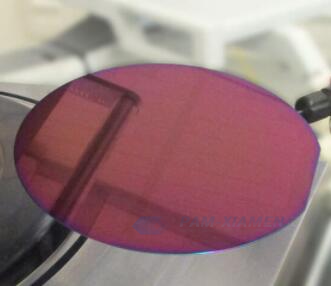 2. What Is the Positive Polarity of LED Wafer?

For the AlGaInP light-emitting diode epitaxial material from us, it is directly grown on the GaAs substrate, and then the N electrode is directly prepared on the back of the GaAs substrate, and the P electrode is prepared on the upper surface of the epi thin film, which is shown as figure 1. This is the positive LED wafer technology. The production process of positive led wafer fabrication is relatively mature, and the production efficiency is high.

Custom Silicon Wafers PAM XIAMEN offers custom silicon Wafers from thinning or reclaiming substrates that you already have to making silicon cubes. We can laser cut or dice wafers into diameters and dimensions that you need. Below is just some of the custom silicon wafer services that [...]

PAM XIAMEN offers SrTiO3 single crystal. SrTiO3 single crystal provides a good lattice match to most of  materials with Perovskite structure.  It is an excellent substrate for epitaxial film of HTS and many oxide. It has been used widely for special optical windows and as high quality sputtering [...]