The application fields of SiC wafers and GaN wafers are mainly divided into electronic power field, radio frequency field, optoelectronic field, and other fields. Among them, electronic power field and radio frequency field are the most important applications, and the advantages of using SiC material are obvious. These two areas have been introduced before, and semiconductor wafer fabrication techniques of GaN and SiC for optoelectronic devices will be discussed in the following part.

First of all, let’s start the semiconductor wafer fabrication process steps with luminescence. Semiconductors have a band gap, which can be used to emit laser light.

A practical laser has three elements: pump source, working substance, and resonant cavity. The pump source is like a power source, giving energy to the working material to emit laser light; the resonant cavity allows the lasers to be superimposed together to obtain higher power light; but the core is the working material—the energy level that can achieve population inversion structure. 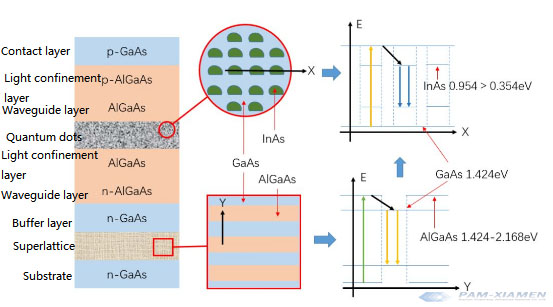 The whole GaAs semiconductor wafer manufacturing process (Figure above), the first is the underlying structure:

Then, it is the upper structure:

The output of the laser is derived from the preparation of the size of InAs to the nanometer level, which increases its energy gap from 0.354eV to 0.954eV (0.954eV=1240nm·eV/1300nm), making it a good intermediate energy level. The pump source is a GaAs laser obtained through the superlattice below. Under the action of the laser generated by GaAs, electrons are continuously pumped to the high energy level of GaAs, and then jump down from the middle energy level of InAs.

Lumi photons absorbed. In order to achieve this more conveniently, the energy level generally used has a structure with a direct band gap.

In fact, in addition to the above luminous GaAs and InP, the third-generation semiconductor material GaN also has a direct band gap. The data of common semiconductors is shown in the table below:

GaN has a larger band gap than GaAs and InP. By adjusting this band gap, a wider range of light output can be obtained.

The band gap of GaAs is 1.42eV, which means that when the light below 873nm is generated. There will be a large absorption, and the light intensity will not work in semiconductor wafer fabrication systems.

The band gap of InP is 1.344eV, which means that when the light below 925nm is generated. There will be large absorption, and the light intensity will not work at this time.

The band gap of GaN is 3.4eV, which means that when the light below 364nm is generated. There will be a large absorption, and the light intensity will not work at this time.

It is the advantage of GaN that can produce visible light and ultraviolet light. The usage of the visible light in semiconductor wafer fabrication process: the blue LED is to add In and Al to the epitaxial GaN; lower wavelength light has greater energy and its professional uses, such as sterilization, marking, cutting, etc.

In order to prepare the GaN devices, SiC substrate has been selected again. The more details about why choose SiC substrate for a semiconductor wafer fabrication, please refer to The SiC Application in Radio Frequency Devices.

The SOS technology uses single crystal sapphire or spinel insulator material as the substrate and grows a single crystal silicon film through a high-temperature epitaxy process to fabricate semiconductor integrated circuits. It is a kind of SOI CMOS technology. The silicon on sapphire structure [...]