The SOS technology uses single crystal sapphire or spinel insulator material as the substrate and grows a single crystal silicon film through a high-temperature epitaxy process to fabricate semiconductor integrated circuits. It is a kind of SOI CMOS technology. The silicon on sapphire structure can provide ideal isolation and reduce the parasitic capacitance at the bottom of the PN junction. Therefore, it is suitable for making high-speed large-scale silicon-on-sapphire integrated circuits to achieve high speed and low power consumption. 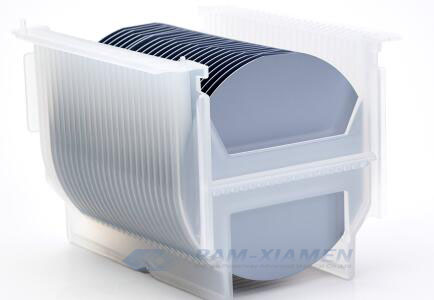 1. How to Grow Silicon Wafers on Sapphire Substrate ?

The equipment and basic process of silicon-on-sapphire epitaxial wafer growth are the same as general silicon homoepitaxial growth. The cutting, polishing, and cleaning of the substrate are roughly the same. Because the sapphire is harder than silicon, the grinding and polishing time is longer.

During the silicon on sapphire process, it is worth noting that the self-doping effect is more serious. Because under the conditions of SoS epitaxial growth, the following reactions will occur on the surface of the substrate:

The aluminium subchloride is gaseous, which causes the sapphire substrate to be corroded and causes defects in the Si epitaxial layer. In addition, H2 and deposited silicon will also corrode the substrate, and the reaction is:

The two-step epitaxy method is combined with the advantages of the two systems SiH4/H2 and SiCl4H2. That is, the SiH4/H2 system is used to quickly cover the surface of the substrate, and then the SiCl4/2 system is used to grow to the required thickness.

SOS epitaxial growth inevitably introduce high-density dislocations, twins, grain boundaries and other lattice defects in the epitaxial layer due to the mechanical damage of the substrate surface and the corrosion between the growth composition and the substrate, lattice mismatch, improper valence bond, strain effect and other factors. These defects interact with heavy metal impurities such as Cu and Fe to form a series of deep energy levels in the forbidden band. In addition, there are crystal defects, reducing  the lifetime of the carrier concentration, mobility and minority carrier. Therefore, the quality of Si epi-layer on sapphire wafer is not so good than that on silicon substrate, and the thinner the epitaxial layer, the worse the performance. However, the Si on sapphire substrate can meet the requirements of MOS devices.

SOS is a hetero-epitaxial structure. The defect density of silicon film is relatively high, so the minority carrier lifetime is short (1-10 nanoseconds), and it is not suitable for making bipolar devices and charge-coupled devices. The leakage from the edge of the silicon island and the back interface (silicon film-sapphire interface) must be suppressed by special methods. The distortion of the drain current from the floating substrate makes the CMOS/SOS structure unfavorable for its application in analog technology. The sapphire single crystal has a high melting point and high hardness, so it is difficult to prepare and process the single crystal.

Kindly note: Due to the rapid changes in the semiconductor wafer market and our production lines, our supply capacity will change with it, but it will not be shown on our website. So we reserve the right to explain all the wafer information on our website.

Overview of Micro-LED History and Current Developments   According to LEDinside’s latest findings, micro-LEDs will enter mass production by 2018. To understand micro-LED technology comprehensively, and tap into its market potential, LEDinside has organized its history, current situation, theory, manufacturing process, and related manufacturers. History The history of micro-LEDs [...]

A test report is necessary to show the compliance between custom description and our final wafers data. We will test the wafer characerization by equipment before shipment, testing surface roughness by atomic force microscope, type by Roman spectra instrument, resistivity by non-contact resistivity testing [...]