PAM XIAMEN offers Thermal Oxide Wafer in 2” ~ 4″ with research grade. Silicon oxide wafer from PAM-XIAMEN is a silicon dioxide film grown on the surface of the silicon wafer by means of oxygen or water vapor under high temperature (800℃~1150℃) conditions through atmospheric furnace tube equipment through the use of thermal oxidation process. The processing thickness ranges from 50 nanometers to 2 microns, the process temperature is as high as 1100℃, and the growth methods for thermal oxide wafer are divided into wet oxygen and dry oxygen. 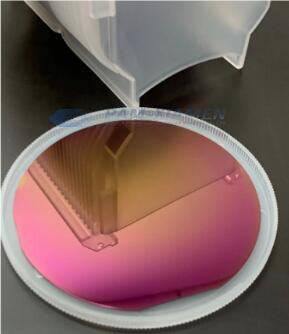 Dry oxygen oxidation for silicon wafer is that silicon reacts with oxygen, and the oxide layer continuously moves toward the base layer. Dry oxidation needs to be carried out at a temperature of 850 to 1200°C, with a low growth rate. When a high-quality, ultra-thin silicon oxide layer is required, dry oxidation is the preferred solution compared to wet oxidation.

Ion implantation barrier layer: Silica plays a role in masking the diffusion of impurities. In the manufacture of integrated circuits, the diffusion of several commonly used impurities such as boron, phosphorus, and arsenic in the silicon dioxide wafer is much slower than their diffusion in silicon. Therefore, when fabricating various regions of semiconductor devices, the most commonly used method is to first grow a layer of oxide film on the surface of the silicon wafer. After photolithography and development, the oxide film on the surface of the doped area is etched away to form a doped window. Finally, the impurities are selectively injected into the corresponding area through the window.

Gate oxide layer: In the manufacturing process of MOS/CMOS integrated circuits, SiO2 is usually used as the insulating gate dielectric of the MOS transistor, that is, the gate oxide layer.

Medium isolation: The isolation methods in integrated circuit production include PN junction isolation and dielectric isolation. One of the two methods, the SiO2 oxide film, that is thermal oxide silicon wafer, is usually selected for dielectric isolation. For example, the field oxygen in the CMOS process (used to isolate PMOS and NMOS transistors) is the SiO2 film, which is used to isolate the active area of the PMOS tube and the NMOS tube.

Insulating medium: Silicon dioxide wafer is a good insulator, so for multilayer metal wiring structures, it is used as an insulating medium between the upper and lower layers of metal to prevent short circuits between metals.

Osram Laboratory Reports 142 lm/W Efficiency Record for Warm White LED Light Source March 15, 2011…Osram Opto Semiconductors reports that it has set a new laboratory record of 142 lm/W for the efficiency of a warm white LED light source. The LED with a correlated [...]

PAM-XIAMEN offers InGaAs APD wafers with high performance. InGaAs avalanche photo diodes(InGaAs APD) are highly regarded for its low noise, higher bandwidth, and spectral response extended to 1700 nm. It is available for 1550nm wavelength after optimizing and very suitable for use in eye-safe laser ranging [...]