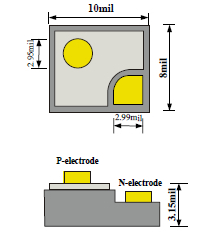 Growth Technique – MOCVD
Substrate Material:Sapphire Substrate (Al2O3)
Substrate Conduction: Insulating
Substrate Orientation: c-Plane (0001)0.2°±0.1
Diameter: 50.8mm±0.15mm
Thickness: 430μm±20μm
Wavelength:395nm-405nm
Physical Parameters
Photoelectric Parameters(IF=20mA,Tc=22℃)
According to industry sources, the UV LED market is projected to make exponential growth at an annual average rate of 43 percent from about 47 billion won last year to 280 billion won in 2017. At the same time, the UV LED penetration ratio in the conventional UV Lamp market is expected to grow from 12.7 percent last year to 34.7 percent in 2017.
Ultraviolet means shorter wavelength light that measures about 100 to 400 nanometers, shorter than that of visible rays. Depending on wavelength band, UV provides such functions as sterilization, purification, and Curing (consolidation of liquid state material). It also has diverse areas of applications, including medicine, surface coating and printing. In the future, its applications will likely further expand to include the environment industry, including purification of waste water.
UV LED is an ultraviolet ray-emitting device, and is a lighting source that uses LED, a semiconductor compound, in lieu of mercury lamp. In the course of LED production, UV LED can be designed to only emit efficacious wavelength required for respective uses, including medicine, home appliances and Curing of coating.
On the other hand, UV LED poses a very high technology barrier due to difficulties in forming photic layer that presents ultraviolet rays. High price and low optical power of UV LED due to technological barriers previously posed obstacles to the expansion of its market.
Some of the many UV-LED applications now supported due to these improvements in LED technology are air, surface and water sterilization (germicidal), pesticide detection, supplying UVB for optimal plant growth, UV curing with more environmentally friendly curing formulations, counterfeit detection, black lights – the list is growing as UV-LED production technology continues to improve.
Source: PAM-XIAMEN
If you need more information about UV LED wafer, please visit our website:https://www.powerwaywafer.com, send us email at sales@powerwaywafer.com orpowerwaymaterial@gmail.com.
2014-04-14 UV LED wafer

The behaviour of n-6H SiC in HF- and KOH-based electrolytes is studied. It is shown that at the room temperature the dissolution of SiC in these electrolytes is accompanied by a number of side effects, such as passivation of the etched surface with an [...]