According to Memes Consulting, the shipment of VCSEL chips for smartphones next year is expected to double to 240 million in 2018. In the next five years, the global VCSEL market will continue to grow with the capacity of relevant suppliers in the international arena. The market size will grow to $3.12 billion by 2022, with a compound annual growth rate of 17.3%.VCSEL device suppliers in Taiwan are all preparing for the strong growth of VCSEL sales in 2018.International VCSEL chip suppliers: such as Lumentum Holdings, Finisar, Princeton Optronics, Heptagon also follow up, and also strive for a share of the market in this field.

Finisar, a US VCSEL chip supplier, has been eye-catching recently and is expanding its plant capacity in Sherman, Texas, USA, with an investment of $390 million from Apple. The newly added capacity is expected to be operational in the second half of 2018. With Finisar’s VCSEL capacity growth, combined with the existing Lumentum supply capabilities, Apple is expected to apply the deep 3D face recognition technology to other products beyond the iPhone X, such as the large size iPad, and applications in the AR(Augmented Reality) field.

According to IQE, the UK’s largest supplier of wafer epitaxial wafers, the annual growth rate of its optoelectronics business revenue has doubled due to the demand of VCSEL. IQE’s financial performance this year is set to record a new record. As VCSEL product development enters mass production in June this year, it is also the main core driver of IQE’s revenue growth this year. IQE said that the surge in the large-scale market for VCSEL wafers marks a turning point in the commercialization of the technology. The company has won several multi-year contracts for the VCSEL surge, reflecting its track record of putting wafers into the mass consumer market. As a result, the company’s board of directors has now approved a capacity expansion plan to meet the higher level of expected demand in the second half of 2018. Xiamen Powerway is the first domestic core microelectronic optoelectronic epitaxial supplier. With the intellectual property advantage that it has established in recent years, and its multiple 6-inch 8-inch MBE process wafer capacity, it will require mass production of complex multi-layer VCSEL products, and will continue to invest in the future to achieve domestic counterpart IQE Technical strength and capacity advantages.

A laser resonator consists of a two-sided decentralized Bragg reflector (DBR) parallel to the surface of a chip active reaction zone, which consists of one to several quantum wells in which the laser light band is present. A planar DBR consists of several layers of different high and low refractive index lenses. Each layer of lens has a thickness of one quarter of the laser wavelength and imparts a reflection intensity of more than 99%. In order to balance the short axis length of the gain region in the VCSEL, a high reflectivity lens is necessary.

In a typical VCSEL, the upper and lower lenses are plated with a p-type material and an n-type material, respectively, to form a junction diode. In more complex structures, p-type and n-type regions may be buried in the lens, allowing more complex semiconductors to be processed in the reaction region to connect the circuit and remove the loss of electron energy in the DBR structure.

VCSEL’s labs use new material systems for research, and the reaction zone may be pumped by short-wavelength external sources (usually other lasers). This allows VCSELs to be demonstrated without considering additional problems of achieving good circuit quality; however such devices are not practical for most applications. A typical VCSEL with a wavelength from 650 nm to 1300 nm is based on a gallium arsenide chip composed of DBR composed of gallium arsenide (GaAs) and [aluminum gallium arsenide] (AlxGa(1-x)As). GaAs/AlGaAs systems are very suitable for fabricating VCSELs because the lattice constant of the material does not change very strongly when the composition changes, and allows multiple lattice-matched rejuvenation layers to grow on the underlying layer of gallium arsenide. However, as the Al molecule increases, the refractive index of the aluminum gallium arsenide becomes stronger, and compared to other systems, an effective Bragg mirror is formed, and the number of layers used is minimized. In addition, in the more concentrated part of aluminum, an oxide forms AlGaAs, which can be used to limit the current in the VCSEL to achieve a low threshold current. 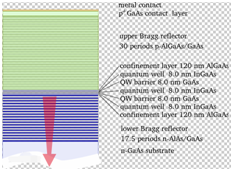 There are two main methods recently to limit the current in a VCSEL, which are divided into two types according to their characteristics: an ion-embedded VCSEL and an oxidized VCSEL.

Due to the tension of the oxide layer and other defects, the cavity began to “popping off”, so the initial use of oxidized VCSEL encountered many difficulties. However, after many tests, it proved that the realibilty of VCSEL is very complete. In Hewlett Packard’s oxidized VCSEL study, “pressure causes the activation energy of the oxidized VCSEL to be similar to the wearout life cycle compared to the output energy emitted by the embedded VCSEL.”

When the industry shifts from research and development to the production mode of oxidized VCSELs, it also creates production difficulties. The oxidation rate of the oxide layer has a very large relationship with the content of aluminum. As long as the aluminum content changes slightly, the oxidation rate will change and the specification of the cavity will be too large or too small.

A long-wavelength device having a wavelength of from 1300 nm to 2000 nm has at least confirmed that its activation region is composed of indium phosphide. VCSELs with longer wavelengths are experimentally based and are typically optical pumps. A 1310 nm VCSEL is preferred over the minimum wavelength limit of a silicon-based fiber.

Simulations are carried out to explore the possibility of achieving high breakdown voltage of GaN HEMT (high-electron mobility transistor). GaN cap layers with gradual increase in the doping concentration from 2 × 1016 to 5 × 1019 cm−3 of N-type and P-type cap are investigated, respectively. Simulation results show that HEMT [...]

In the present work, dislocation arrays are investigated in float zone (FZ) grown silicon wafers by the light beam induced current (LBIC) mapping technique at different wavelengths and by deep level transient spectroscopy (DLTS). The LBIC technique appears to be able to recognize and [...]