For non-cubic crystals, they are inherently anisotropic, that is, different directions have different properties. Take the silicon carbide crystal faces for example as below:

The expression of anisotropy will be directly reflected in the different properties of different crystal planes. In crystals, different silicon carbide crystal faces are represented by differences in crystal plane indices. The crystal face index is also called the Miller index, which is (hkl).

The specific representation is: establishing the coordinate system of the crystal, the intercept of this crystal face and the coordinate axis will be a, b, c, and then take the reciprocal of the intercept 1/a, 1/b, 1/c, and reduce to the simplest integer ratio, which is (hkl). For crystals of the trigonal and hexagonal crystal system, (hkl) = (hkil), i=-h-k. However, according to the symmetry of the crystal, there will be a series of silicon carbide crystal faces that are the same. For example, (100) and (200) are just not reduced to the simplest integer ratio.

There are many applications for anisotropy.

The growth properties of seed crystals in different directions are very different. Taking the crystal face (0001) as the reference, the wafer deflected by a certain angle (step flow) is easier to grow silicon carbide.

There are also huge differences in the nature of electricity. For example, the silicon carbide crystal face (0-33-8) is used to prepare silicon carbide MOSFET. Due to its lower interface state density and higher free electron ratio, the surface has the highest channel mobility at all doping concentrations.

As shown in the figure, when a doping concentration of 10^18/cm3 is used, a high channel mobility of 60cm2V-1s-1 and a threshold voltage as high as 4V can be achieved—this voltage is sufficient to suppress false start at high temperatures. It is higher than the (0001) crystal plane.

Using this property, a Japanese company developed a new structure for SiC MOSFET. It has a V-shaped groove and uses (0-33-8) crystal planes, thus having higher mobility performance.

The unit cell parameters of the trigonal and hexagonal crystal systems are a and c. The calculation method of crystal plane (h1k1l1) (h2k2l2) is as follows:

The key to producing this device is to use a chemical etching process to form a V-shaped trench. Use silicon dioxide as an etching mask, and perform etching in a chlorine atmosphere at about 900°C.

Note: ion etching cannot be used. Although ion etching is a general method for forming U-shaped trenches, it will cause etching damage and the formation of sub-trenches.

Through the image of scanning electron microscope, it can be seen that the chemical etching has obtained high-quality crystal planes. 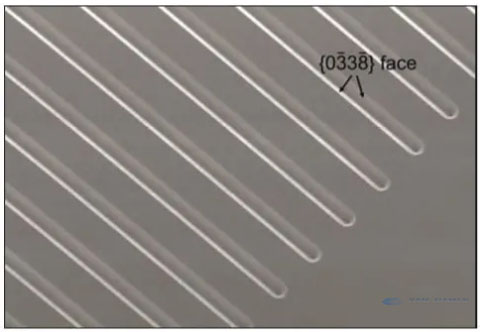 GaN on Si for Power, D-mode

PAM-XIAMEN offers GaN on Si HEMT wafer for Power, D-mode. Because of the heterojunction structure of GaN and AlGaN, the GaN HEMT on Si Substrate structure has one important property of high electron mobility. The HEMT Si wafers can be for device fabrication as well as [...]