Worldwide semiconductor revenue totaled 334.8 billion dollar in 2015, a 2.3 percent decline from 2014, according to final results by Gartner. The combined revenue of the top 25 semiconductor vendors fell by 0.5 percent during 2015. This was a better performance than the rest of the market, however, which saw a 6.9 percent revenue decline. The top 25 vendors accounted for 73.5 percent of the market, down slightly from 74 percent in 2014. “The worldwide semiconductor market declined in 2015 as slowing demand for key applications combined with strong currency fluctuations to subdue the market – said Andrew Norwood, research vice president at Gartner -. 2015 saw a mixed performance by the different device categories, unlike 2014 when all categories posted positive growth. Nonoptical sensors performed best due to increased usage of fingerprint sensors in smartphones, while discretes saw the strongest decline due to a mix of weak demand and currency issues”. Intel retained the n. 1 market share position for the 24th consecutive year, capturing 15.4 percent of the worldwide market, despite experiencing a 1.2 percent revenue decline in 2015. Infineon Technologies experienced the strongest growth among the top vendors, moving from n. 12 to the n. 9 position in 2015. Gartner also said that 2015 saw record merger and acquisition activity between major semiconductor vendors, including several acquisitions and disposals that had a material effect on semiconductor sales. “2015 semiconductor revenue results are skewed by the large amount of M&A activity during the year – commented Mr. Norwood -. If we adjust for this M&A activity by adding in revenue for 2015 and 2014 where necessary, then the performance is somewhat different: the top 25 vendors would have experienced a 1.7 percent revenue decline, and the rest of the market would have declined 3.9 percent”. 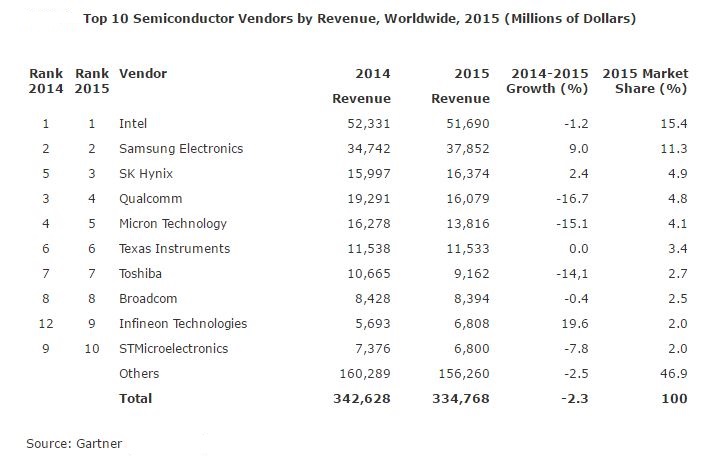 Xiamen Powerway Advanced Material Co.,Ltd., a leading supplier of GaAs Epi wafer and other related products and services announced the new availability of size 2″-4” is on mass production in 2017. This new product represents a natural addition to PAM-XIAMEN’s product line. Dr. Shaka, [...]

PAM XIAMEN offers CZT and MCT crystal. CZT and MCT crystal are new semiconductors which enables effective conversion of radiation to electron. The technology will reform radiography and radiation measurement in medical and industrial areas. We both provides the standard substrate , CZT and [...]