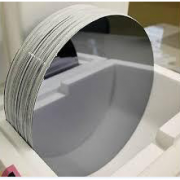 3. About the Etched Wafer Process

Silicon wafer etching refers to the use of sodium hydroxide to corrode polysilicon to remove the surface damage layer produced by the multi-wire saw slicing of the silicon wafer. At the same time, the anisotropy of sodium hydroxide on silicon corrosion is used to strive for a surface texture with a lower reflectivity.

In wet etching, liquid chemical reagents (such as acids, alkalis, solvents, etc.) chemically remove the material on the surface of the silicon wafer. Wet etching is generally only used for larger sizes (greater than 3 microns). Wet etching is still for etching epitaxial wafer on the silicon substrate or to remove residues after dry etching.

An ideal etching in wafer fabrication must have the following characteristics:

6″ FZ Silicon Wafer with Diameter 150mm, Both Side Etched