The long-wavelength InGaAsN quantum well laser based on GaAs substrate is one of the most promising development directions. InGaAsN laser structures are usually grown by molecular beam epitaxy (MBE) or metal organic vapor deposition (MOCVD). InGaNAs material is a promising material for long wavelength vertical cavity lasers, which can be grown on GaAs or InP wafer. PAM-XIAMEN provides GaAs epitaxial wafer with InGaAsN epilayer as follows: 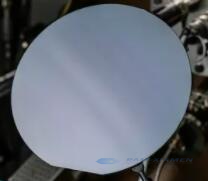 As an important III-V semiconductor material, GaAs has been widely used in the research and preparation of optoelectronic/photovoltaic devices. In order to obtain semiconductor compounds with different optoelectronic properties, the same group of atoms with similar properties to the matrix elements can be dissolved in GaAs to realize the energy band tailoring of the material. InGaAsN is obtained by solid solution of In and N elements in the GaAs matrix.

InGaAsN film grown on GaAs substrate has a zinc blende structure, and this quaternary InGaAsN alloy is a direct bandgap semiconductor with very wide emission wavelength coverage (0.8eV-1.4eV). Different from the In and N doping alone, when In and N atoms are doped into the GaAs matrix at the same time, the change of the energy band width shows a unique trend, as shown in Figure below. An obvious feature is that the forbidden band width of the InGaNAs system decreases rapidly with the increase of N concentration. Compared with GaAs, the conduction band offset of InGaNAs material is larger, so it has stronger electron confinement ability and better temperature stability of the material. 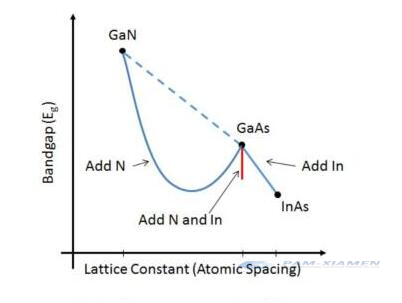 Fig. Band gap vs. Lattice Spacing when In and N atoms Doped in GaAs

As a new alloy system, InGaAsN semiconductor alloy has an obvious feature that 2% nitrogen can reduce the band gap with more than 30%. In addition, the most remarkable feature of InGaNAs is that it can adjust its own band gap width in a wide range by adjusting the composition of N and In while matching the lattice of the GaAs substrate.

3. Studies for MBE Grown Epitaxy of InGaNAs on GaAs (001)

We use MBE to grow the dilute nitrogen compounds on GaAs (001) substrate. We found that the crystal quality of the film is better and the surface of the film is relatively flat when the As/II beam ratio is 20.

By studying the effect of growth temperature on film growth, changes in crystal structure, surface and interface conditions were analyzed. It is found that In is easy to bond with N at low temperature, and it is easy to bond with As at high temperature. This tendency to bond leads to changes in the InGaAsN crystal structure and the surface/interface morphology of the film, and then it is concluded that the more suitable temperature for growth should be 440℃. Besides, we studied the effect of growth rate on the growth of InGaAsN thin films, and found that the faster the growth rate, the better the crystal quality and the smoother the surface.

In view of the high energy gap adjustment ability of dilute nitrogen compounds, they are very suitable for the preparation of long-wavelength lasers (like InGaAsN VCSEL), near-infrared detectors and thin-film solar cells.

PAM XIAMEN offers SrTiO3 single crystal. SrTiO3 (STO) single crystal provides a good lattice match to most of  materials with Perovskite structure.  It is an excellent substrate for epitaxial film of HTS and many oxide. It has been used widely for special optical windows and as high quality [...]

PAM-01C2 is a hemisphere CZT based probe in a super small size. It can detect X-ray and low energy γ-ray in a high resolution. PAM-01C2 integrated customized CZT crystal and low noise charge sensitive preamplifier circuit. It can convert X/γ-ray into exponential decay signals. Working [...]