Defects of Silicon Carbide can bring about different natures, and these natures often need to be avoided. However, they have a positive effect in using. The representative utilization of the defects is a variety of point defects of silicon carbide.

What Are Point Defects of Silicon Carbide？

Point defects of silicon carbide refer to defects within the range of several atomic sizes in crystals, including:

The color centers that silicon carbide crystals produced now are as follows:

It can be seen that the most typical combined defect of Si vacancy + electron has a spin of 3/2. The spin of a simple ion can be obtained by the electron orbit, for example, Cr3+ is 3d3, and the spin is 3/2. Due to the symmetry of the surrounding environment, the spin of color center cannot simply use the molecular orbitals to calculate. Si vacancy defects are surrounded by dangling bonds with four C atoms providing four electrons. In the absence of electron injection, the symmetry is D2d (mirror), instead of Td (tetrahedron), spin=0; inject one electron, spin=3/2.

Under different magnetic fields, the color center energy level changes, which can be used for magnetic detection after the standard data is measured.

The color center energy level changes at different temperatures. After measuring the standard data, it can be used for temperature detection.

Light excitation, the color center spin changes. After measuring standard data, it can be used as a switch, that is, quantum computing.

However, the color center is often unstable at room temperature, or the weak signal, manifesting as phonon broadening. The low temperature leads to a weakened phonon effect, obtaining photoluminescence spectrum lines, which are called zero phonon lines (ZPL).

Excited by 532nm light, the obtained 1-4 are zero phonon lines, and the high temperature is due to the broadening caused by phonons. 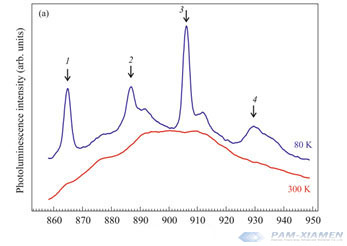 Temperature changes in different magnetic fields are as follows:

You can buy quartz wafer for SAW components from PAM-XIAMEN, which is a leading quartz wafer supplier in China. There are three common shapes of quartz wafers: round, square, SMT special or rod type (also square, but relatively small). When the orientation is different, [...]