This can be used in a high-capacity wireless network with coverage over a radius of several kilometers. In areas where fiber-optic cable is difficult to lay, to achieve high-speed wireless communications of several gigabits per second, one promising approach is to use high-frequency bands, such as the W band, which uses a wide frequency band. In order to get good long-distance coverage in these frequencies, however, it is necessary to increase the output power of the power amplifier to the scale of watts. Fujitsu succeeded in developing a power amplifier for W-band transmissions using GaN-HEMT technology capable of high output at 100 GHz. Evaluations of the newly developed power amplifier confirmed it to have 1.8 times increased output performance than before, which would translate to an increase of over 30% in transmission range when used in a high-speed wireless network. A portion of this research was conducted as part of a project of the National Institute of Information and Communications Technology (NICT) on “Agile Deployment Capability of Highly Resilient Optical and Radio Seamless Communication Systems.” Details of this technology are being presented at Power Amplifiers for Wireless and Radio Applications (PAWR2016), opening January 24 in Austin, Texas.

In order to transmit wireless signals over a distance of several kilometers, the transmission antenna needs a power amplifier capable of a high output on the order of several watts. Existing power amplifiers for high-frequency transmissions in the millimeter-wave band (30-300 GHz), which are built using gallium arsenide or CMOS semiconductors, are limited by their operating voltage to an output of about 0.1 W, and it has not been possible to increase this. GaN-HEMT power amplifiers have achieved high output performance in the microwave range (3-30 GHz), but the problem up until now was that their output performance declined in the W-band range. To solve these problems, Fujitsu developed a GaN-HEMT device with a unique structure capable of increasing output in the millimeter band (Figure 1). This uses a layer of indium-aluminum-gallium-nitride (InAlGaN), and double-layer silicon nitride (SiN) passivation film to increase current density by a factor of about 1.4, resulting in 3.0 W of output power from a transistor per 1-mm of gate width, at a high frequency of 100 GHz. In developing this transistor, Fujitsu collaborated with Professor Yasuyuki Miyamoto of the Tokyo Institute of Technology in developing a device-simulation technology. 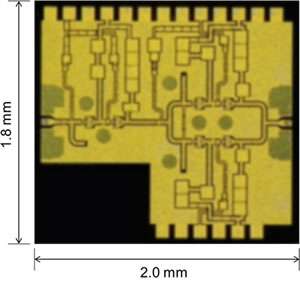 Fujitsu succeeded in developing a power amplifier with the world’s highest W-band output performance using this GaN-HEMT device with a proprietary structure (Figure 2). In order to successfully design a power amplifier with high output performance, Fujitsu precisely measured and modeled the characteristics of GaN-HEMT during high-frequency operation. Based on that, a circuit was designed where pairs of GaN-HEMTs were grouped together into compact, high-gain units with low power loss. In order to maximize the power from these units, GaN-HEMTs were connected in a series by the interstage circuit where the signal lines and the device layouts were carefully laid out. Using a model of these compact, high-gain units, Fujitsu conducted simulations to optimize the distributor and combiner matching circuits between the units, and their layouts and signal lines, resulting in a high-amplitude power amplifier (Figure 3). A prototype power amplifier had amplitude that multiplied its input by a factor of 80, producing 1.15 W of output power. Power output per transistor, a measure of power-amplifier performance, was 3.6 W per 1 mm of gate width, the highest in the world.

The newly developed power amplifier achieved a 1.8 times increase in power-amplifier output over previous W-band power amplifiers, with the world’s highest output performance (Figure 4). This translates to an improvement of over 30% in terms of range for wireless communications at speeds of several gigabits per second. 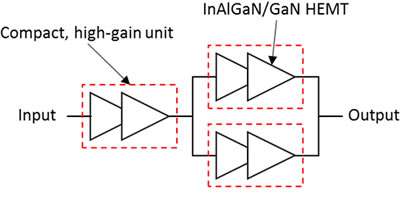 Figure 3: The compact, high-gain circuit that was used 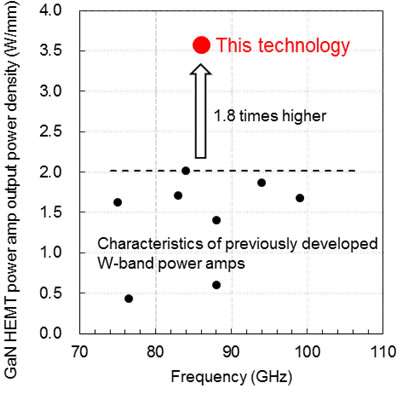 PAM-128 is a test system based on CZT photon counting array detector. It integrates four multi-pixel photon counting module and a thermal control system. The energy it can test ranges from 20~160KeV. Its testing resolution is 1.5lp/mm. And it support multi-energy-region test. It can [...]

GaN Substrates Offer High Performance At A Price   GaN substrates are manufactured by only a handful of companies at prices prohibitive to volume production, but offer great potential for high-performance devices. Richard Stevenson reports.The GaN component market was worth $1.35 billion in 2003 according to [...]