How to Improve the Reliability of Silicon Carbide Power Devices’ Technology in Terms of the Material?

How to Improve the Reliability of Silicon Carbide Power Devices’ Technology in Terms of the Material?

– How to Improve the Reliability of Silicon Carbide Materials?

Silicon carbide ingot defects will greatly affect the yield of the final device, which is a very important topic in the industry chain, and various substrate manufacturers are sparing no effort to reduce the defect density of silicon carbide ingots.

The substrate is the product obtained by cutting the crystal ingot into thin slices, smoothing and polishing. The substrate obtains a good surface quality after the polishing process, which can suppress the generation of defects in the epitaxial growth, thereby obtaining a high-quality epitaxial wafer. Its surface quality includes flatness, near-surface dislocations and residual stress.

Epitaxy refers to the growth of a single crystal material 4H-SiC on the upper surface of the substrate, which is homogeneous with the substrate. Silicon carbide has many isomers. In order to ensure the preparation of high-quality epitaxial materials, special techniques are required to avoid introducing other crystal types. The current standardized process is to use 4° beveled 4H-SiC single crystal substrates with steps control growth technology.

The current commonly used process is the CVD method. The commonly used equipment is a hot-wall horizontal epitaxial furnace, and the often used reaction precursor gases are silane (SiH4), methane (CH4), ethylene (C2H4), etc., and nitrogen (N2) and trimethylaluminum (TMA) are used as a source of impurities. The typical growth temperature range is 1500~1650 ℃, and the growth rate is 5~30 μm/h.

The growth of the epitaxial layer can eliminate many surface or near-surface defects introduced in crystal growth and wafer processing, making the crystal lattice neat and improving surface morphology. Thick epitaxial layer, good surface morphology and low doping concentration are of great significance to increase the breakdown voltage. Such epitaxial wafers are used to manufacture power devices, which can greatly improve parameter stability and yield. 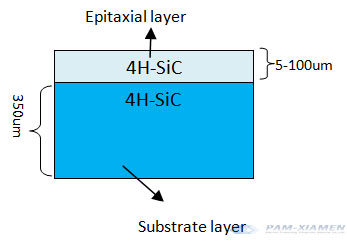 5. The Relationship between Silicon Carbide Epitaxial Wafers and Substrate Defects

6. The Impact of Silicon Carbide Epitaxial Wafer Defects on the Final Device

TSD and TED do very little affect on the performance of the final silicon carbide device, but BPD will cause the degradation of device performance. So people pay more attention to BPD. Stacking faults, carrot defects, triangle defects, falling objects and other defects are killer defects. Once these defects appear on the device, the device will fail the test, resulting in a lower yield, e.g. bipolar devices. Triodes and IGBTs are more sensitive to BPD.

One of the important challenges faced by silicon carbide materials is that the price for promotion is too high, and the price of the substrate is much higher than that of silicon and sapphire substrates. At present, the mainstream diameter of silicon carbide substrates is 4 to 6 inches, and more mature growth techniques are needed to expand the size to reduce the price.

Formation, etching and electrical characterization of a thermally grown gallium oxide on the Ga-face of a bulk GaN substrate

Thermal oxides on the Ga-face of low defect density bulk gallium nitride (GaN) were controllably produced under varying conditions and subsequently analyzed. The thermal oxidation was performed in a dry oxygen atmosphere at different temperatures and different oxidation times. Each oxide layer was identified [...]

PAM XIAMEN offers LiF Lithium Fluoride Crystal. LiF crystal has excellent VUV region transmittance. It is used for windows, prisms, and lenses in the visible and infrared in 0.104 μm – 7 μm. LiF crystal is sensitive to thermal shock and would be attacked by [...]