Two aspects should be considered in the growth of silicon carbide crystal:

The characteristics of silicon carbide crystals can be analyzed on the basis of the phase diagram (Changes in temperature and other conditions of the draw is not very accurate): 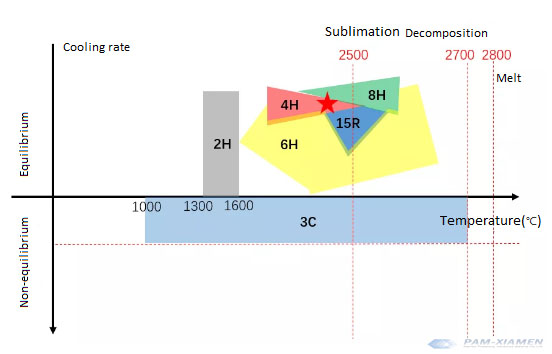 Under normal conditions, silicon carbide has decomposed before it becomes a liquid, so there is no pure silicon carbide in a liquid state participating in the SiC crystal growth process. If Si is excessive, the liquid phase range is 0.01%~19%, and it is possible to use the liquid phase method. However, when the temperature is higher than 1700℃, large amount of Si will evaporate, thus, the SiC crystal growth cannot be achieved through simple binary eutectic growth technology. 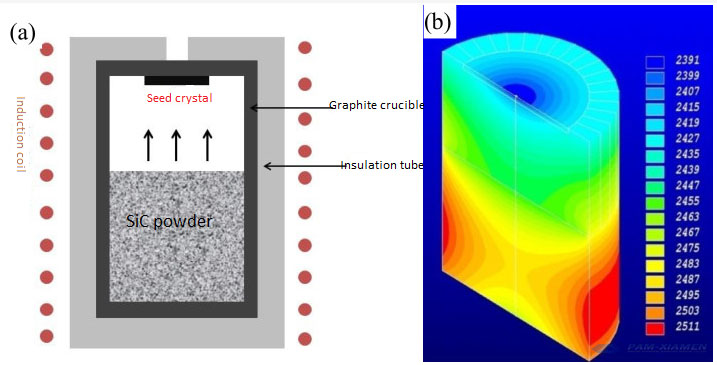 The theoretical temperature field for growing high-purity semi-insulating 6-inch SiC: the seed crystal temperature is 2200℃, the growth pressure is 30mbar, the H2+Ar atmosphere, and the thickness can reach 22mm.

The main process of this method is a physical process, and no chemical reaction occurs. The raw material gas is silicon carbide, and the growth obtained is also silicon carbide. Taking the specific equipment into account, physical vapor deposition includes sublimation-condensation (Physical Vapor Transport, PVT for short), vacuum evaporation, sputtering, ion beam deposition, molecular beam epitaxy, and laser abrasion. Law and so on.

For example, GaAs is grown by the MOCVD method. The typical experimental method is:

The pressure is 8kPa, the temperature is 500-630°C; the raw material is the mixed gas of TMGa/AsH3 carried by H2. Under such conditions, TMGa+AsH3+H2 react to produce GaAs.

Similarly, silicon carbide can grow single crystals, using physical vapor transport and high-temperature chemical vapor deposition. As shown in the figure below, the raw material for physical vapor transport is silicon carbide solid, which turns into a gas after heating, and finally grows into a crystal on the surface of the seed crystal (note: PVT method requires a seed crystal, otherwise it is a Lely method). However, chemical vapor deposition is different. The raw material is gas, and a chemical reaction occurs directly on the surface of the seed crystal to form crystals.

The solid SiC powder will decompose and sublimate into several different gas phase components. The main gaseous components are Si, SiC, Si2C, and SiC2. The reaction formula is as below; C in the graphite crucible can react with Si vapor, generating SiC2 and Si2C; In addition, there will be a small amount of C, C2, Si2, Si3, Si2C3, etc. in the gas phase composition, but they can be ignored.

During the decomposition process of SiC raw materials, due to the non-uniform sublimation of the raw materials, the number of Si atoms in the gas phase composition is far greater than the number of C atoms. A high non-stoichiometric ratio will cause the separation of Si and C. Si accumulates in the gas phase, while C aggregates in the solid phase. The growth material will be severely graphitized at the moment. Theoretically, keeping ratio of the Si: C at 1:1 near the growth interface is the most ideal growth method, but this is difficult to keep the ration in the actual silicon carbide crystal growth process. For this reason, the stoichiometric ratio can be maintained by adding an appropriate amount of Si to the growth material to balance the excess C.

When Si, SiC, Si2C, SiC2 gases reach the surface of the seed crystal, crystals are continuously formed in the metastable region:

Therefore, the defects of the grown silicon carbide single crystal need more technical means to control and it is generally used to produce conductive SiC substrates.

The chemical vapor deposition method uses special gases as raw materials, making a higher cost. Now, it can only be used to produce semi-insulating SiC substrates. The two typical chemical reaction paths are as follows:

Only using SiH4, Si droplets will be formed when V (Si): V (H2)>0.05%. Then, halogens can be introduced into the raw materials, which can reduce Si defects. The types used include HCl, SiCl4, SiHCl3, CH3Cl, SiCl3H3, and SiH3Cl.

Substrate preparation and cleaning——Put the substrate into the reaction chamber——Vacuum——High temperature in-situ etching of the substrate——Inject the original gas for the epitaxial growth of SiC——The experiment is over, take out the sample

Growth rate: 5-10um/h, the standard process is as follows:

PS: 1bar=1atm=100kPa, easy to compare with the standard atmospheric pressure

This is the main method for silicon carbide crystal growth, the two vapor phase methods: PVT method and HTCVD method.